Posted on October 17, 2016 by coteetcampagne

The best laid plans of mice and men and French country village house restorers gang aft astray. They do.

When I bought this heavily carved buffet de cuisine it was always intended to be the dramatic focal point of the kitchen diner. I thought we had done enough planning and measuring to accommodate it in the centre of that room but no. 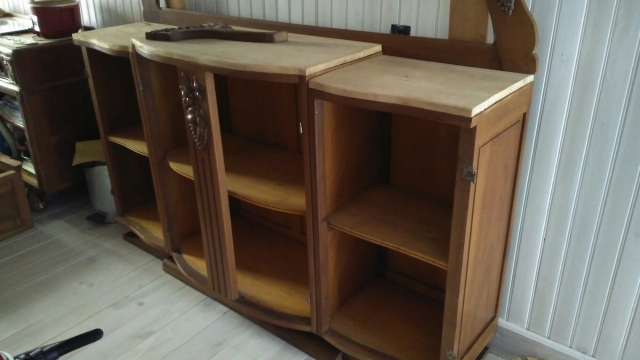 First of all we wipe it down (it has been in the cave for nine years). Then we take it apart into three sections (cue Trev tearing his hair out) then we fetch the base upstairs.

And I find woodworm holes….

There is no other woodworm activity evident in the cave, probably because we spray every scrap of new or old wood that comes into the house. So are they historic? It looks like it, but why did I not notice this when I bought it?

Then we note that the damage, particularly to the six doors is quite bad;obviously allowed historically to get damp and it has separated the veneer (the doors aren’t solid wood like the rest) but the cave is not damp so it’s historic.

So we put it back together upstairs, put in the back section and lift the top cupboard  into place. Call me Superwoman.

Then we find that we have a grave issue. Someone has knocked this piece about and put it back together very badly. It looked fine in the brocante but it was obviously cleverly staged. Now I recollect, the vendor was unwilling to remove all the junk on and around it on the basis she was on her own and couldn’t manage it. And she intimated that we couldn’t help due to health and safety issues.

Then it was delivered in two sections and chucked in cave under a tarpaulin.

Now don’t get me wrong. I have bought and sold old stuff for decades and there is always a risk but this buffet is not quite the  reasonably sturdy piece that I thought I was getting.

Basically to fit it back together properly we are going to have to partly remake it and fit it to the wall at six points for stability.

Plus fitting it between the plug sockets and light switches had been a juggling act ( I know. I decided where these would go… )

Of equal concern is that, although the wood is of medium tone, it is adversely affecting the balance of light right at the centre of this long room

Artist, period home maker, renovator, restorer, Francophile. My mission is to save the old stuff, one beautiful piece at a time
View all posts by coteetcampagne →
This entry was posted in Antique and Vintage finds, Renovation and restoration diary- France and tagged buffet, carved. kitchen. diner, country, cuisine, french, solid wood, veneer, village. Bookmark the permalink.

This site uses Akismet to reduce spam. Learn how your comment data is processed.